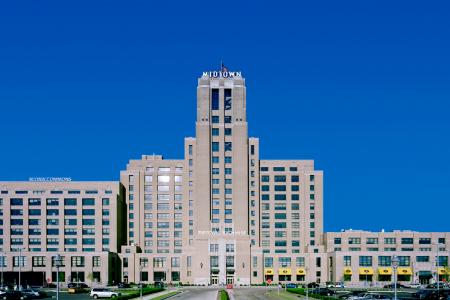 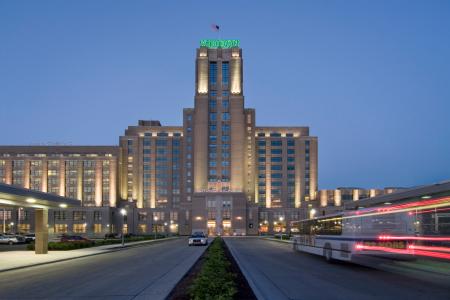 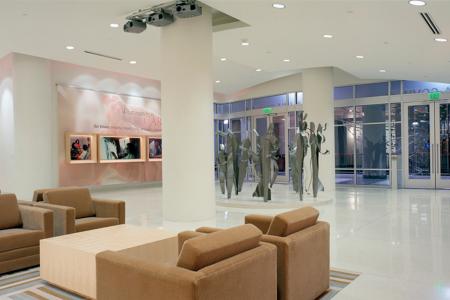 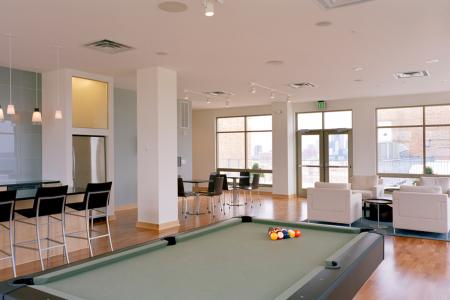 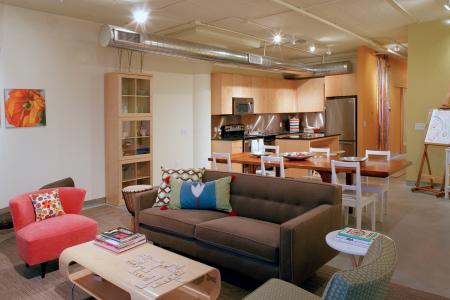 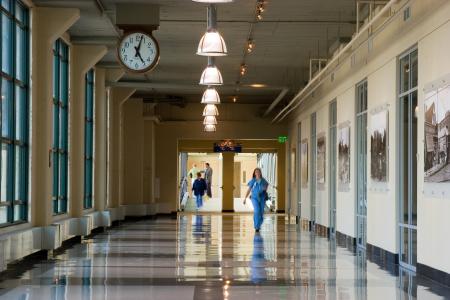 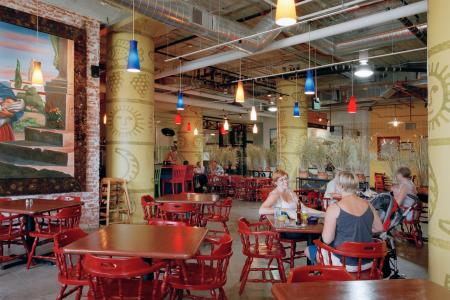 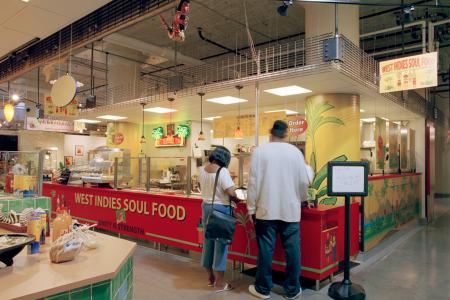 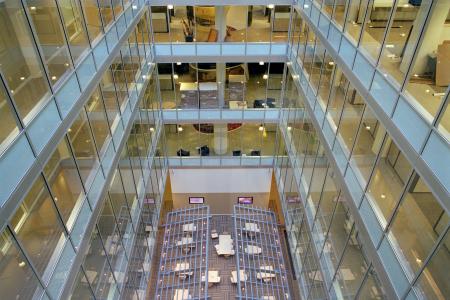 A retail giant shuts down; the surrounding neighborhood deteriorates. After 10 years of darkness, the City of Minneapolis realized it needed an uncommon solution to re-light a once iconic site and renew a neighborhood’s vibrancy. Built in 1928 as a massive retail and distribution center for Sears, the art deco monolith sat vacant after its closing in 1994. The City of Minneapolis acquired the property in 2001 after previous attempts to convert the site fell through, and in 2004 Ryan was awarded development rights to transform the space. The result is Midtown Exchange, a visionary mixed-use hub in the heart of Minneapolis’ Midtown district.

The three-block development is anchored by office space for nearly 1,700 employees of Allina Hospitals and Clinics, the largest non-profit healthcare provider in Minnesota. Sherman Associates and Project for Pride in Living developed affordable and market-rate apartments and condominiums occupying 11 floors of the historic building, as well townhomes and flats in buildings lining the outside of the project’s parking ramp. Connected by walkways to the nearby Abbott Northwestern Hospital, a 136-room, full-service Sheraton Hotel serves hospital visitors, patients and their families, as well as a host of corporate guests. The ground floor of Midtown Exchange is home to the Midtown Global Market, an eclectic, multicultural year-round public marketplace and business incubator developed by a consortium of non-profits led by the Neighborhood Development Center.

Constructed in less than two years despite a number of significant challenges, the Midtown Exchange breathes new life into a historic Minneapolis icon. A truly innovative feat of funding, construction, community and design, the project represents the best of public-private investment supporting strong and inclusive urban neighborhoods.

Allina Hospitals and Clinics, which operates Abbott Northwestern Hospital one block north of Midtown Exchange, planned to consolidate their metropolitan office operations into one location. After considering our proposal, Allina agreed to locate its corporate headquarters, to be called Allina Commons, in the north section of the Midtown Exchange building. A skyway would provide access across the Midtown Greenway to Abbott Northwestern and Children’s Hospitals.

Gaining Allina’s lease commitment was a key factor in allowing the core developers, along with their team of historic preservation, government relations and neighborhood advocacy consultants, to proceed with the master development plan. Development of the different parts of the project proceeded simultaneously, with Ryan managing nonstop troubleshooting and problem solving. The sheer team size could have been unwieldy, but we maintained constant communication and prioritized face-to-face connection through weekly team meetings in order to keep things running smoothly.

After Sears abandoned their massive retail and distribution center in Minneapolis’ Philips neighborhood, symptoms of urban blight soon appeared at the site. Windows were broken then boarded-up, and the parking lot, designed to draw first-time car owners, began to draw drug dealers instead. Two proposals to raze and redevelop the huge art deco structure floundered, and concerns about crime and public safety continued to grow. In the late nineties a wave of Somali and Hispanic families moved into the area and opened small businesses, but despite this infusion of positive energy the Sears building loomed over the neighborhood—literally and figuratively.

When the City of Minneapolis awarded the site’s development rights to Ryan in 2004, we committed to a plan that would address job creation and public safety while respecting the diversity and history of the neighborhood. We established the highest goals ever set by the City of Minneapolis for equal opportunity/affirmative action programs in a construction project. Subcontractors played a key role in exceeding our goals for hiring neighborhood residents, women and minority workers, and utilizing minority- and women-owned businesses in the construction process. The Midtown Global Market was conceived in part to alleviate minority entrepreneurs’ fears that big-box retailers would force them out of the neighborhood, and to act as an incubator for new small business owners to develop.

From the bustling new Metro Transit bus station to the increased linkage between Lake Street, Chicago Avenue and the Midtown Greenway bike trail, the three-block development has surpassed its vision of social and economic exchange. As a true neighborhood hub that honors the area’s history and supports inclusive long-term development without the exclusionary effects of gentrification, the Midtown Exchange’s positive impact on the surrounding community can hardly be measured in numbers.

Historic preservation of the Sears building was one of the primary redevelopment objectives set by the Minneapolis Department of Community Planning and Economic Development (CPED). Additionally, securing historic designation for Midtown Exchange from the National Register of Historic Places and the U.S. Department of the Interior was crucial to gaining a 20 percent federal tax credit, making it an essential element of the project’s success. Ryan engaged Hess Roise, a Minneapolis historical consulting firm, to prepare the extensive documentation and coordinate the review process.

Detailed descriptions of the site and the 1928 building, interior and exterior photos and complete redevelopment plans were submitted to the State Historic Preservation Office and required federal agencies. Ryan’s approved proposal included brick cleaning for the entire building; parapet repair; restoration of 188 original windows and the creation of nearly 1,700 replicated replacement windows; accentuation of the concrete mushroom columns, floors and ceilings; a renovated entrance; and the demolition of the 1964 Sears annex to bring daylight to the Midtown Greenway and the dark northern sections of Allina Commons.

Lengthy negotiation was required for other elements of the proposal. After discussion, the ten-story atrium and skylight in the north section’s office tower was approved, but required a screen enclosure over the three-story light well in the south section’s apartment tower. Preservation of the west parking lot as a historically significant feature of the Sears site was also required, which meant that landscaping and urban planning proposals had to be modified. The compromises were agreed to, and the historic designation—an important measure of project success—was achieved in August 2005.

Midtown Exchange presented major construction challenges. The discovery process revealed far more environmental problems than expected, including lead paint and contaminated ash that required removal. Moreover, more than 80 percent of the Sears building’s roof structure had to be repaired and reinforced, rather than the originally estimated 25 percent. Since the variety of new uses for the building had different mechanical requirements and historic restoration regulations prohibited penetration of the outside walls, an extraordinary number of mechanical systems had to be accommodated on the roof. The existing roof structure could not tolerate the required load capacity, so structural engineers pinpointed sections of the rooftop to be taken apart, strengthened and rebuilt.

These and other surprises threatened to derail the tight construction schedule, but Ryan’s internal team of design-build specialists came up with extremely innovative solutions that could be implemented simultaneously. With more than 750 construction personnel on site each day at the height of construction and one million square feet of structures on a ten-acre site, extra space was at a premium. Project managers played to the site’s strengths, including repurposing portions of the building that were not under construction for material storage and reusing existing building docks and bays for deliveries.

Throughout it all, the Ryan team went above and beyond to minimize disruption to the neighborhood. This included limiting working hours to minimize noise, and carefully coordinating construction parking so area residents and visitors weren’t inconvenienced.

Secretary's Award of Excellence in Preservation, 2006 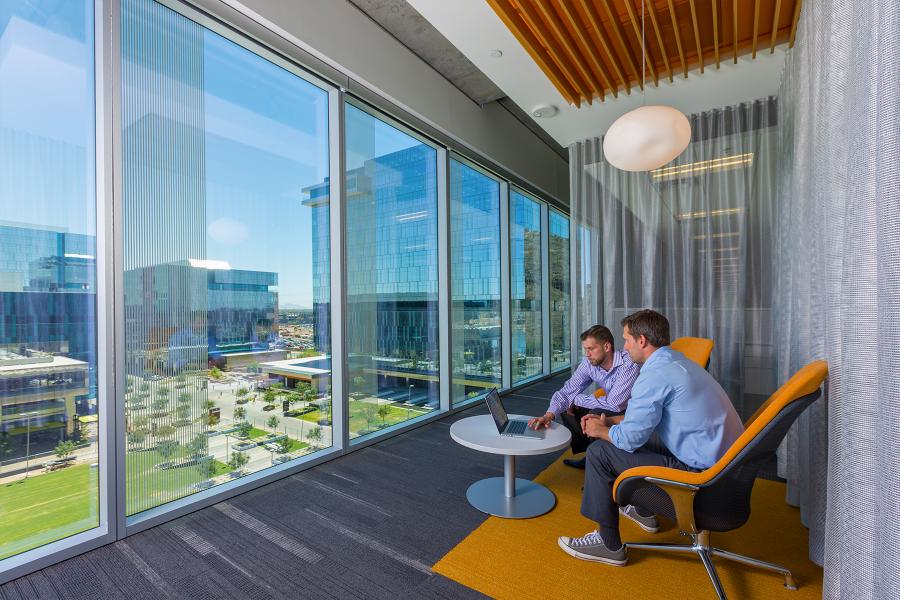